Kimberly Hoffman, Coordinator of Science Libraries, has been selected as the recipient of the Edward J. Belanger Jr. Staff Award for Excellence in Service for 2012. 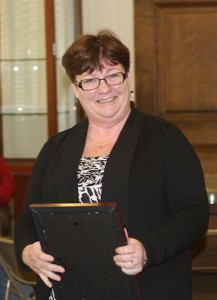 Ed Belanger worked for the Libraries for over 40 years before retiring in 2002 as our business manager. His service and dedication to his fellow staff was extraordinary; and he is one of the most positive, up-beat, and good natured people you will ever meet. After his retirement, his children made a donation to the Libraries for the creation of an award in his honor.

Each year the Libraries select a staff member of the year who not only contributes outstanding service to the library but also shares Ed’s good nature. Our recent practice has been for the past honorees to serve as the award committee, selecting from among nominations submitted by library staff.

Excerpted from one of her many nominations:

“…her impact on the libraries and University as a whole is immense. She brings enthusiasm and expertise to her work that has a profound impact on our patrons. Her passion comes through in her dedication to re-creating the science libraries as an information hub that is incredibly useful to students. Kim is a joy to work with and I always look forward to meeting with her about projects and initiatives.”