Posts with the tag: Chriatmas music

No, that isn’t a typo. The actual title of the song as it was given by composer Meredith Wilson in 1951–despite the first line of verse–is “It’s Beginning to Look Like Christmas.” Don’t believe me? Here it is in the 1951 Catalog of Copyright Entries from the Copyright Office of the Library of Congress: 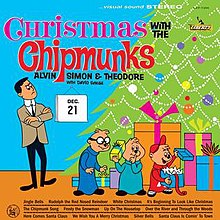 And for most early commercial recordings, that is the name that appears on the label. The original recording was released by RCA Victor in September 1951 sung by Perry Como and the Fontane Sisters and backed by the Mitchell Ayers Orchestra. However, the second interpretation, released by Decca a month later, is more well-known today. With vocals by Bing Crosby and Jud Conlon’s Rhythmaires and an accompaniment by John Scott Trotter’s orchestra, the classic track starts with a quote from “Jingle Bells” (N.B.: If you want your Christmas song to be a hit, quote “Jingle Bells.”). Even The Chipmunks got the name of the song correct on their Christmas album, Christmas with the Chipmunks (Liberty, 1962; see right), as did Johnny Mathis on his 1986 album Christmas Eve with Johnny Mathis (Columbia). Mathis’s cover, made famous by its inclusion in the 1992 holiday box office hit Home Alone 2: Lost in New York (20th Century Fox), competes with Crosby’s 1951 version as the most popular recording of the song.

Okay, so we’ve cleared up the question about the name of the song. What remains unclear is what location Wilson may be describing in his lyrics. Residents in Yarmouth, a small coastal village in Nova Scotia, believe that “It’s Beginning to Look Like Christmas” is about their town. According to local legend, a famous composer spent an extended vacation there in the late 1940s and rented a room in the Grand Hotel in the center of town. Across the street from the hotel is Frost Park, and both were adorned with large Christmas trees each December. Wilson lyricized: “There’s a tree in the Grand Hotel / One in the park as well / The sturdy kind that doesn’t mind the snow.” Furthermore, a five and dime (thrift shop) was located just down Main Street, which was lined with large candy canes. “Take a look in the five-and-ten / Glistening once again / With candy canes and silver lanes aglow.” Unfortunately, there is no record of an M. Wilson checking-in at the Grand around that time (though he could have used an alias). However, he was known to visit the area on occasion.¹ Another possible inspiration is the Park Inn Hotel (now operating as the Historic Park Inn) in Wilson’s hometown of Mason City, Iowa. This famous landmark, constructed in 1910, is the last remaining hotel designed by Frank Lloyd Wright in the world, and sits adjacent to the city’s Central Park.

Wilson went on to write three Broadway musicals. His first and most successful was The Music Man (1957). The second, The Unsinkable Molly Brown (1960), also met high acclaim. The third, however, was not as successful. An adaptation of the 1947 classic holiday film Miracle on 34th Street, Wilson’s Here’s Love opened on October 3, 1963 in the Schubert Theatre and closed the following July. For the show, Wilson reused “It’s Beginning to Look Like Christmas,” which he had written twelve years earlier, combining it with a new song “Pinecones and Holly Berries.” Perhaps this mash-up will give you a fresh look at this treasured number from the American Christmas songbook.