Posts with the tag: textbooks

This post is guest-authored by Lea Wade, STEM Librarian, University Libraries, and member of the Textbook Affordability Task Force of the Washington Research Library Consortium.

Textbook costs are increasing. Since 1977, college textbook prices have risen over 1,000 percent.

Vox had a recent article on how much students spend on textbooks, and what publishers are offering to do to help. Over two-thirds of students skip buying or renting some required texts because they can’t afford them.

The cost varies from course to course – generally, prices for textbooks in the sciences and analytical studies such as accounting are much higher than in the humanities. At Catholic University, the most expensive textbooks cost $446 for an accounting textbook to $396 for an Italian language textbook with the accompanying online access code. When the course requirement includes paying for an online access code, students do not have the option of renting or buying a used textbook. In those cases, students may resort to sharing with a friend or doing without the required online access. Other students may drop out altogether if they cannot afford the required textbooks. 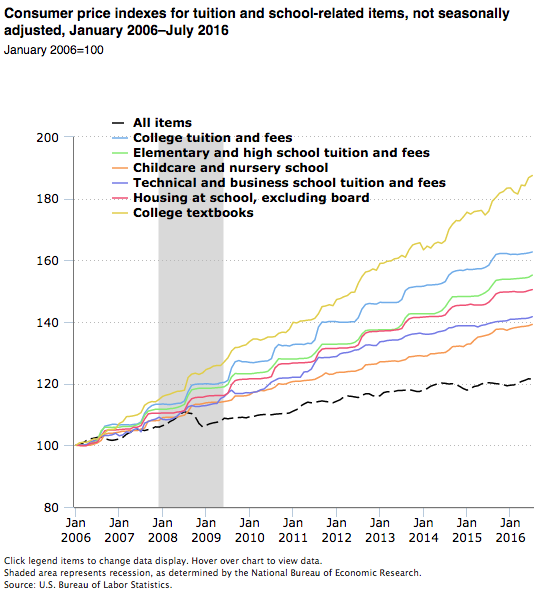 Student success and retention have been demonstrably improved through transition to affordable textbooks (Winitzky-Stephens, 2017; Hardin, 2018).

Libraries and colleges can work together to reduce the burden of textbook pricing on students. The Catholic University of America University Libraries is leveraging its membership in the Washington Research Libraries Consortium to examine options. One option is expanding textbook access through library reserves. Another is expanding the use of Open Educational Resources, or Open Textbooks. A recent report from the Public Interest Research Groups has laid out some options for resolving the problem by embracing Open Textbooks. 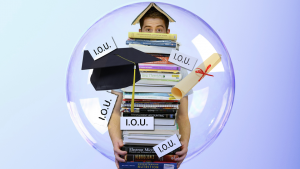 “Open Educational Resources (OERs) are teaching, learning, and research resources released under an open license that permits their free use and repurposing by others. OERs can be textbooks, full courses, lesson plans, videos, tests, or any other tool, material, or technique that supports access to knowledge.”–Scholarly Publishing & Academic Resources Coalition.

OER involves replacing textbooks with openly licensed and easily accessible documents and media. With OER textbooks, students have access to the text online at no cost. Faculty can be assured that if students do not read the assigned text, it is not because they couldn’t afford the text.

Some universities are providing grant funding to faculty who agree to refocus their courses to include the use of OER. Even more funding is often provided to faculty who write an open textbook. Years of advocacy for open educational resources has begun to move the needle toward greater acceptance. Student Public Interest Research Groups have released an action plan for universities and faculty to help relieve the burden of textbook cost. An associated student-led campaign, the Open Textbook Alliance, provides simple handouts and guides on open textbooks.

Your subject liaison librarian can help you identify free open-source textbooks if you are wondering what is already available. There are several online open repositories of textbooks that are free and available to use for your research and coursework.

If you are wondering what is already available, there are several online open repositories of textbooks that are free and available to use for your research and coursework.

Some OER Repositories include the following sites:

You can learn more about what other campuses are doing to improve student success by reducing textbook cost burden from this article [Espocito, J. The Coming Wave of Affordable Textbooks [https://scholarlykitchen.sspnet.org/2018/11/19/the-coming-wave-of-affordable-textbooks/], November 19, 2018].

This week’s post is guest-authored by Austin Arminio, a graduate student in the field of Library and Information Science.

For the past three months, I worked on a project to digitize publications of the Commission on American Citizenship of The Catholic University of America. During the 1938 Golden Jubilee of The Catholic University of America (CUA), Pope Pius XI sent a letter of congratulations to the American hierarchy. In this letter, he also gave the church leaders an assignment to create a curriculum for Catholic school students giving special attention to civics, sociology, and economics. The Bishops heeded the call, prompting CUA to create the Commission on American Citizenship. The Commission’s goal was to develop a school curriculum that educated elementary students on how to be both good American citizens and moral Catholics.

The Commission, founded by CUA faculty members Fr. Joseph M. Corrigan, Msgr. Francis J. Haas, and Msgr. George Johnson, went about creating textbooks to educate children on American history, literature, mathematics, citizenship, and Christian morals. Some of these works, such as the Madonna Speller series, would not be out of place in a public school, teaching writing, grammar, and spelling; while others like Faith and Our Freedom: This is Our Parish, dealt exclusively with Catholic religious teachings and how they apply to everyday life. Some books contained messages that were considered astonishing for their time. Faith and Freedom: These are Our People has the story of Eddie Patterson inviting his Chinese-American and African-American friends to his birthday party. While some of the language would be considered stereotypical today, CUA archivist Dr. Maria Mazzenga notes that at the time of the books publishing, Jim Crow and the Chinese Exclusion Act were still enforced.

During my time on this project, I was glad for the opportunity to create metadata and use a digital document repository such as Islandora, the software used by the Washington Research Libraries Consortium (WRLC). I had previously only worked with the scanning of documents, leaving the later steps to others, so it was interesting to deal with this part of the archival process. While it was time-consuming and required attention to detail using coding systems such as HTML and XML, the overall process was fairly simple. I believe that alone is an important and vital part of digital archiving. If these systems are to be adopted by libraries and archives, it is vital they be easy to use by both those who create them and those who use them for research.

At the same time, this project made me painfully aware of the limitations of digital technology. This project, which only involved scanning 19 works, the longest of which was around 250 pages, took me almost three months to complete. In contrast, the actual creation of metadata and uploading the files to Islandora only took around two days. While obviously larger digitization projects would involve more than just one person working on scanning, it is clear to me time and resources are the main obstacles for digital archiving. To remedy this, institutions might instead benefit by only focusing on certain collections for online digitization. Those items that are most visually interesting, such as the brightly colored and illustrated CAC texts, are some of the best candidates for digitization, as they are likely to draw attention and interest to the larger collection.