The Catholic University of America has a teaching collection of Coptic, Greek, and Arabic papyri (mostly fragmentary) acquired by Msgr. Henry Hyvernat (1858-1941) in the early twentieth century. This includes 157 numbered items (CUA Museum Hyvernat Collection), along with one Demotic papyrus fragment. The materials are housed in the Semitics/ICOR library.

In 1984 former ICOR Curator Dr. Leslie S.B. MacCoull drew public attention to the CUA collection with her edition of 57 of the papyri. In 2006-2008 Visiting Associate ICOR Curator and papyrologist Dr. Chrysi Kotsifou focused on much-needed conservation initiatives, working with APIS (Advanced Papyrological Information System) representatives. In January 2008 at her suggestion the University Libraries, the Institute of Christian Oriental Research (ICOR) and the Center for the Study of Early Christianity sponsored a two-day conservation seminar in the Semitics/ICOR Library to instruct a group of CUA Libraries staff, faculty and graduate students in the conservation, imaging and cataloging of papyri. Invited participants were trained in APIS-level standards of papyrus conservation. Over the next 18 months the Semitics/ICOR Library held 19 papyrus conservation workshops and successfully treated 107 papyri, removing acidic cardboard mounts and tape; cleaning and aligning papyri fibers, making joins, checking for mold, and glass-mounting papyri. Writing was found under the cardboard mounts of more than one-third of the treated papyri.

More attention has been paid to the collection over the past five years. In 2015 James G. Keenan re-edited CUA p75.73 with a new interpretation of this 6th century Greek payment order for cavalry fodder. In 2016 Nikolaos Gonis published a revised edition of CUA p75.02, a 6th century Greek fragmentary text of the reimbursement of an oil worker named Apollos. This year Lajos Berkes and Nikolaos Gonis have published a collection of 17 CUA texts in their article, “Monastic Wine Distributions in the Eighth Century: Papyri from The Catholic University of America.” The texts include a collection of wine delivery orders (Greek-Coptic 8th century), as well as 6th/7th and 7th/8th c. fragments of letters, receipts and accounts. On the first page of this article they provided a succinct description of the CUA collection: “The papyri of the Catholic University of America are mainly Coptic, but there are some (unpublished) texts of the Roman period as well. The bulk of the collection seems to stem from a monastic context.”

Papyri from the CUA collection were reviewed in a May Gallery workshop directed by Meghan Howard (Semitics dept. graduate student) following her March 27, 2019 Hyvernat Eve Lecture, “From the Nile to the Seine: Working with Coptic Documentary Papyri from the Collection of the Sorbonne.” In July 2019 Jacco Dieleman, Research Associate Professor (Department of Semitic and Egyptian Languages and Literatures) identified the Demotic papyrus fragment in the collection as part of a larger papyrus scroll from the so-called Tebtunis Temple Library. Papyri were featured in the Oct.-Dec. 2019 May Gallery exhibit for the Center for the Study of Early Christianity’s Christian Culture Conference: “Treasures New and Old: Christian Cultures and Culture in the Patristic Age.” In the Spring 2020 academic semester Janet Timbie, Adjunct Associate Professor (Department of Semitic and Egyptian Languages and Literatures) introduced a new course: SEM 783 Studies in Coptic Epigraphy supported by the Coptic epigraphic (papyri and ostraca) and manuscript collections in the Semitics/ICOR library.

On Wednesday October 25, 2019 Cardinal Berhaneyesus Souraphiel and the Ethiopian ambassador to the United States Fitsum Arega visited the Semitics/ICOR Library to view a special exhibit of manuscripts selected from 183 Christian parchment codices in the ICOR collections. They are part of the Gerald and Barbara Weiner gift of 727 Ethiopian manuscripts deposited in the ICOR collections (183 Christian parchment codices, 367 scrolls, and 177 Islamic manuscripts with connections to the historic Ethiopian city of Harar). Material from the Clementine Library in the Rare Books Collections also was on display. The Clementine Library bears witness to the study of Ethiopic in the Roman colleges during the 16th through 18th centuries. 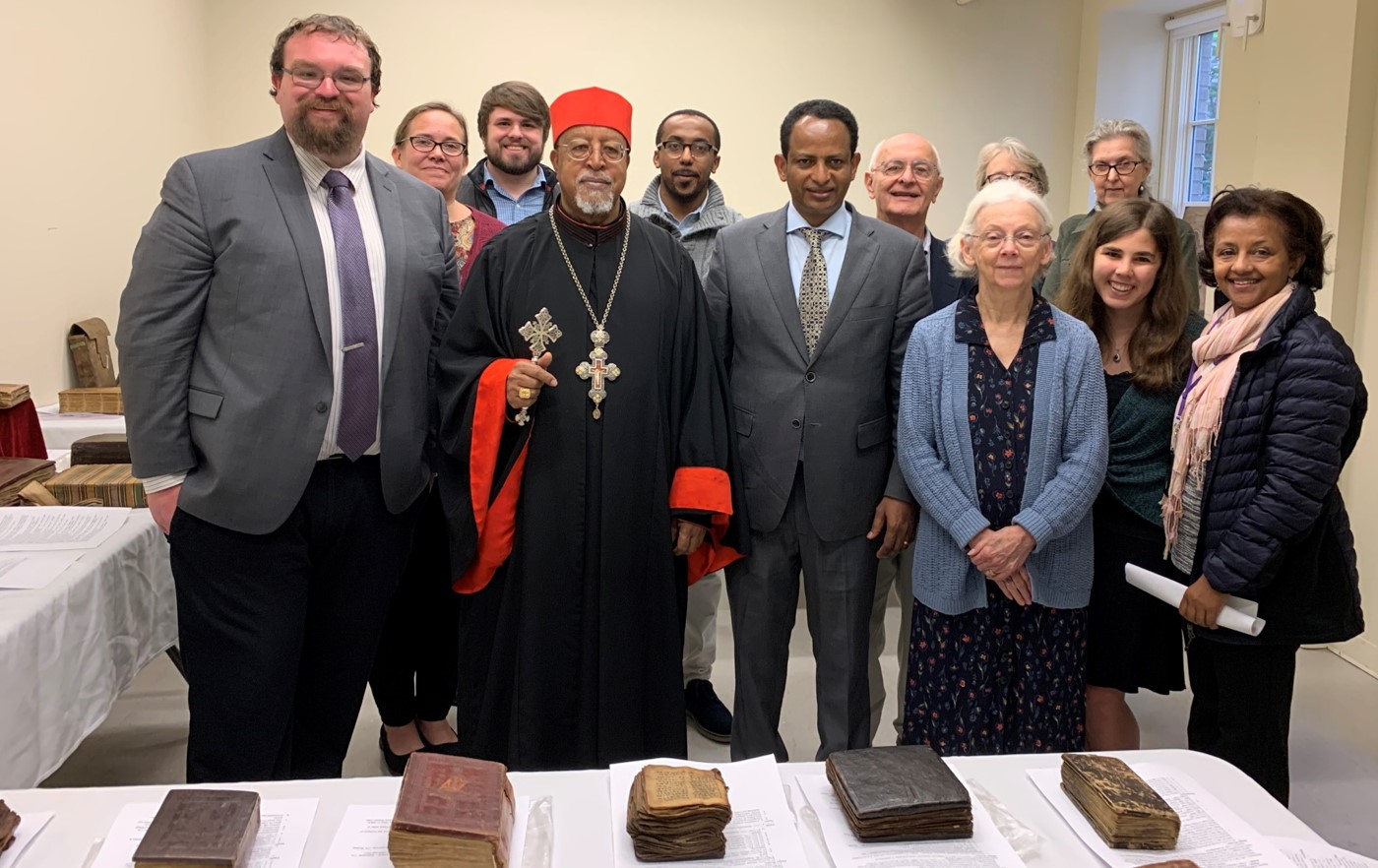 February 5, 5:30-6:30 May Gallery, Mullen Library The Catholic University of America

Sponsored by the Institute of Christian Oriental Research (ICOR) in conjunction with the Department of Semitic and Egyptian Languages and Literatures Address inquiries to Dr. Aaron Butts (buttsa@cua.edu). 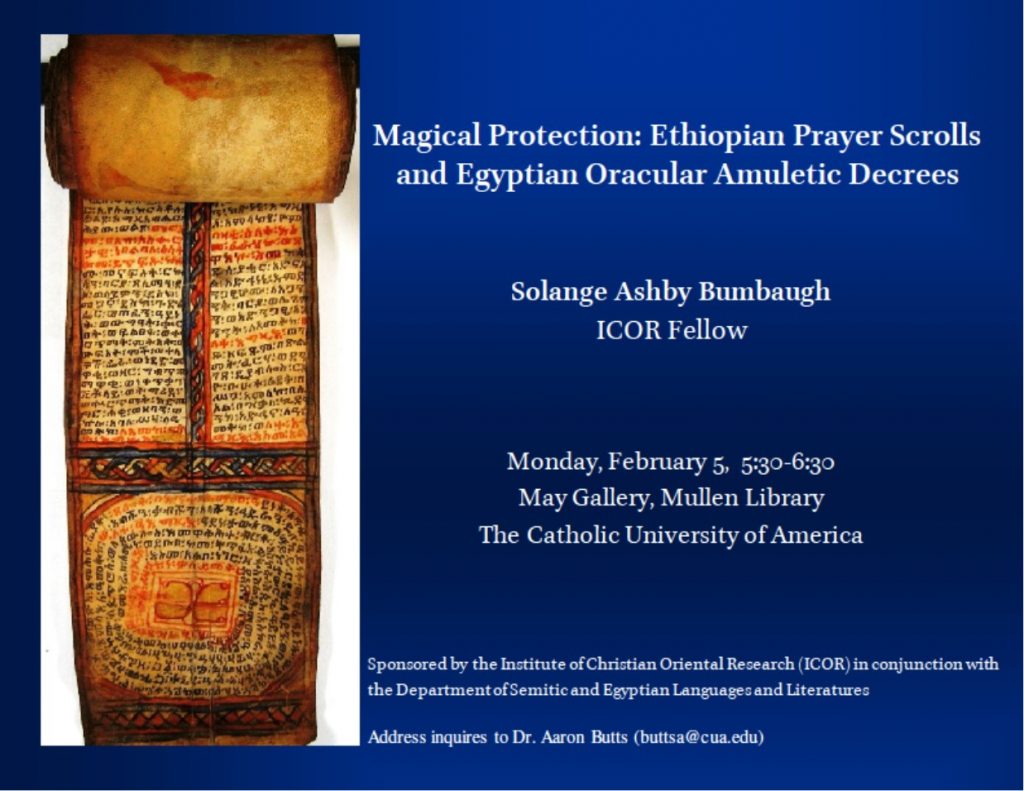 Mount Serabit in the Sinai desert of Egypt is the site of the discovery of some of the earliest examples of West Semitic alphabet writing.  This Proto-Sinaitic script has been called the first alphabet.  The exhibit focuses on the work of the 1930 Harvard-Catholic University Joint Expedition to Serabit-el-Khadim and on the contributions of Fr. Romain Butin, S.M. who served as research epigrapher.

Curated by Michelle Datiles, GLP, the exhibit includes materials from the Epigraphic Collection in the Semitics/Institute of Christian Oriental Research Library. The exhibit is on display now through  March 9 in the May Gallery of the John K. Mullen of Denver Memorial Library

Some 11 items from the Père Albert Jamme, M.Afr. Collection have been loaned to the Smithsonian’s Sackler Gallery for its upcoming exhibition, “Unearthing Arabia: the Archaeological Adventures of Wendell Phillips,” October 11, 2014-June 7, 2015, Arthur M. Sackler Gallery.

The Père Albert Jamme, M.Afr. Collection in CUA’s Semitics/ICOR Library brings together in one place 55 years of work (ca.1946-1999) by an eminent scholar of the languages and scripts of pre-Islamic Arabia.

Fr. Jamme (1916-2004) was a faculty member of CUA’s Department of Semitic and Egyptian Languages and Literatures between 1953 and 1997. He served as research epigrapher for important archeological expeditions to the Arabian peninsula.

The Jamme Library is a large ‘integrated’ epigraphic collection in which the evidence of inscribed stones, latex and paper squeezes or impressions, photographs, slides, rubbings, and line drawings of the inscriptions can be studied side by side with Fr. Jamme’s site maps, work notes and published studies, with the comparative lexical data of his Old South Arabian and Old North Arabian card indexes, and with his professional correspondence and research archives. Additional support is provided by his reference library of books and serials.

Work is underway to improve access to this important collection. It is the focus of a digitization project in Mullen Library. The collection, which has been in offsite storage, also is being rehoused in an epigraphic seminar room within the Semitics/ICOR library.

From this Summer, we changed the system behind the “FindIt” button

, and have a new page to access our online databases and e-journals. Please see below for the summary:

We also have a new ticket system set up for you to report the problems related to our online services. We are looking forward to bringing you a better service!

Digital Imaging of Christian Near Eastern Collections at CUA

Join our team of volunteers

A Cultural Heritage Project
The Catholic University of America Libraries houses an important collection of early and rare books on the Christian Near East, along with support collections of manuscripts, antiquities, photographic and archival resources. The use of digital technology to increase access to these Coptic, Syriac, Arabic, Armenian, Georgian, and Ethiopic holdings is a desideratum. It will benefit scholars who are hampered by lack of access to materials in this specialized field of studies; it will benefit members of the Christian communities in the Middle East, Africa, India, and in the worldwide Diaspora for whom the materials are part of their cultural patrimony.

On May 10, 2012 CUA Libraries begins a new digitization project for Beth Mardutho’s eBeth Arké II. This two month project will focus on the CUA Syriac collections; it also may include other materials in the Semitics/ICOR Library.

Our expectation is to run two equipment stations 40 hours per week (80 work hours per week). The Project Workroom (030 Mullen Library) will be open Monday-Thursday (9am-7pm); Friday (9-5 pm); Saturday hours are a possibility as well.

Library practicum opportunities for CUA SLIS students will be considered.