Posts with the tag: research

Last week, CUA Research Day had interesting research on mindfulness. As we all gear up (pay heed to that motion metaphor!) for the end of an academic semester, here are some readings on note taking and attention; mind mapping; and the art of slow!

Attention, Students: Put Your Laptops Away

And there are two hypotheses to why note-taking is beneficial in the first place. The first idea is called the encoding hypothesis, which says that when a person is taking notes, “the processing that occurs” will improve “learning and retention.” The second, called the external-storage hypothesis, is that you learn by being able to look back at your notes, or even the notes of other people. [Source: Mueller, Pam A. and Oppenheimer,  Daniel M. 2014. “The Pen is Mightier than the Keyboard:
Advantages of Longhand Over Laptop Note Taking.” Psychological Science OnlineFirst,. doi:10.1177/0956797614524581. ]

Having briefly thought about this, I want you to take a single sheet of paper (any size, shape will do) and drawing with a pencil or pen, carve it up in some grid-esque fashion that represents the shape of your day. It can be this day, a recent day, a memorable day, or a typical/amalgamation day. And then inhabit these spaces you’ve drawn on the page with lines, marks, or gestures that represent your activity or emotional state during those times represented. The emphasis here is to do your best to not draw things. (You can always do that later!) And also, you can leave space blank on your page – but that has to mean something. This isn’t writing where you can finish a final sentence mid-page. Every inch of the composition is important in comics – so be aware of that as well. Finally, when I do this in class or with groups, I give people about 5-10 minutes to do it, so they have to make decisions quickly. Try to give yourself a similar limit. [Source: Salter, Anastasia. 2016. Thinking through Comics with Nick Sousanis’s Grids & Gestures. http://chronicle.com/blogs/profhacker/thinking-through-comics-with-nick-sousaniss-grids-gestures ]

‘Slow Professor’: Challenging the Culture of Speed in the Academy

In a corporate university, argues Slow Professor, “power is transferred from faculty to managers, economic justifications dominate, and the familiar ‘bottom line’ eclipses pedagogical and intellectual concerns.” But slow professors nevertheless “advocate deliberation over acceleration” because they “need time to think, and so do our students. Time for reflection and open-ended inquiry is not a luxury but is crucial to what we do.” [Source: Berg, Maggie and Barbara Karolina Seeber. 2016. The Slow Professor: Challenging the Culture of Speed in the Academy. Toronto: University of Toronto Press. And, Flaherty, Colleen. “‘The Slow Professor’.” https://www.insidehighered.com/news/2016/04/19/book-argues-faculty-members-should-actively-resist-culture-speed-modern-academe, accessed April 19, 2016.] 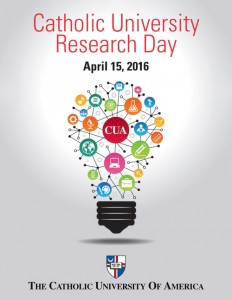 Join us on Friday, April 15 for the inaugural CUA Research Day!

What do all the CUA Research Day presenters and poster participants have in common? They started with a question and they did research!

The recently published Ithaka S+R US Faculty Survey 2015 findings include that while the discovery process has many access points, faculty still rely heavily on the library web site and catalog; faculty need more information about data management and repositories; monographs are favored over ebooks; and traditional scholarly outputs – journal articles and books – still reign supreme.

The most important finding for libraries may be:

Interest in supporting students and their competencies and learning outcomes shows signs of surging. Since the previous cycle of the survey, there has been an increase in the share of faculty members who believe that their undergraduate students have poor research skills and a substantial increase in the perceived importance of the role of the library in helping undergraduate students develop research, critical analysis, and information literacy skills.

We will see you Friday, April 15 at CUA Research Day! Look for these poster presentations from the library:

Digital Toolkit: Essentials for the Researcher of Today and Tomorrow: What we can learn from #HamiltonMusical!

Scholarly communications can get bogged down in discussions of metrics, publishing models, open access,  promotion & tenure, and funder mandates. These discussions are important but miss that essential ingredient that makes the world spin and life worth living – passion!

The first CUA Physics Department Colloquium of February featured Raffaele Resta, Ph.D. speaking on Are Polarization and Magnetization Really Bulk Properties?   Dr. Resta’s was an Adjunct professor from 1996-1999 at The Catholic University. The passion of the researcher drew the audience along on his more than forty year journey of the mind imaging and mathematically establishing polarization and magnetism theories.

Dr. Resta has one of the most cited papers and many books on his subjects. While we, who are not physicists, may not understand the intricate mathematical equations on Dr. Resta’s slides; we can recognize his passion for his subject and appreciate the language of this passionate research:

What is a good property? Why do we need somewhat exotic theories? What is the nearsighted QM Maxwell demon? One’s head spins with imagining that the nasty position operator “r” is ill defined, convergence with the Flake size, orbital magnetization density, or the Haldanium paradigm (F.D.M. Haldane, 1988)…

END_OF_DOCUMENT_TOKEN_TO_BE_REPLACED

2015 is the four hundredth anniversary of the novel Don Quixote of La Mancha by Miguel Cervantes. This article by Arturo Conde (NBC News) Cervantes Don Quixote Has become a Handbook for Life likens Don Quixote to a superhero – “a man who created a new identity, made his own armored costume, and fought to change the world into a better place.”

Readers treat the novel like an “open book with blank pages” because depending on where they are in life, they can see themselves reflected in many ways.

Blank pages is an apt metaphor for the beginning of an academic year; a new life on a college campus for First Year students and new challenges for all undergraduates; a deeper dive into research and teaching for graduate students; and new students, conversations and opportunities for faculty.

Blank pages mean something entirely different to the librarians collaborating with researchers. Librarians abhor blank pages – whether they be print or digital. We want those pages filled with the essential research you need. For your research quest – your essential research needs –  reach out to your liaison librarian, not so much squires, as subject experts, all! END_OF_DOCUMENT_TOKEN_TO_BE_REPLACED

There should be a course for this! Open Access does not mean free. The Public Library of Science (PLoS) defines Open Access as “unrestricted access and unrestricted reuse.” The Open Access movement founding is often attributed to the Budapest Open Access Initiative (2002) and Peter Suber has written and presented in detail about Open Access. For the most informative and concise overview please read Open Access Overview by Peter Suber.

Nancy K. Herther in her recent post  Scholarly Publishing & Peer Review Face the Future explains the peer review issue with Open Access; and Joe Esposito enumerates some of the complex issues with publishers and Open Access in his post  The Context of Scientific Publishing.

Open access and social networking readings seem to be coalescing around the “idea” of reading carefully!

The Pew Research Center documents that usage of social media is increasing.  Two other articles question whether social media or open access have any impact on scholarly communications.

Social Media and Its Impact on Medical Research by Phil Davis

Is Open Access a Cause or Effect? by Phil Davis

Read carefully! It’s all in the methodologies.

US Department of Energy Public Access Plan was released on July 24, 2014. [Plan]

The Department of Energy (DOE) has implemented their own Public Access Gateway for Energy and Science (DOE PAGES – Beta) as a repository for federally funded research.

In US Department of Energy Announces Public Access Plan (David Crotty, Aug. 4, 2014), copyright issues, text and data mining access, and use of data management principles are discussed. These issues and more will need to evolve through communication and practice.

Update: From DOE/Office of Scientific and Technical Information

The Department of Energy’s Office of Science has issued a “Statement on Digital Data Management“<http://science.energy.gov/funding-opportunities/digital-data-management/>.  The new requirements regarding management of digital research data will appear in funding solicitations and invitations issued by the Office of Science beginning Oct. 1, 2014.   Other Energy Department research offices will implement data management plan requirements within the next year.

Three hundred early eighteenth-century French and Latin titles from the Albani collection, many of them the only exemplars in the United States, are now cataloged and available to researchers in Rare Books and Special Collections (214 Mullen). A sampling of their content may be found at the RBSC blog:   http://ascendonica.blogspot.com/

Confused by copyright?  You are not alone.  Two newly created research guides will be help you find the answers to your questions.  Copyright and Beyond (Basic Edition) is written with the undergraduate in mind and Copyright and Beyond (Advanced Edition) will be of assistance to graduate students and faculty.