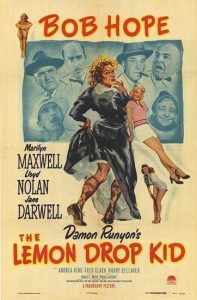 In the summer of 1950, Paramount Pictures approached Jay Livingston and Ray Evans, a songwriting duo with a knack for writing hit numbers for films and theme songs for television series (Bonanza and Mr. Ed). Paramount was working on the film The Lemon Drop Kid, which is set in New York City in the days leading up to Christmas. Thus, the studio felt the picture needed a Christmas song, and they wanted it to be sung by the leads Bob Hope and Marilyn Maxwell. Initially, Livingston and Evans were less than enthusiastic. In a 2005 interview recorded for NPR, Evans recalled: “…[w]e figured–stupidly, thank God–that the world had too many Christmas Songs already.”¹ They were also nervous that another flop would result in Paramount terminating their contract, which was up for renewal.

Their inspiration came from a little bell that sat on one of the gentlemen’s desks. It reminded them of the bells rung by men dressed as Santas on street corners collecting donations for the Salvation Army.² Their original title for the song was “Tinkle Bells,” as their tiny bell made a tinkling sound when rung. When Livingston shared the draft with his wife, she encouraged them to consider replacing “tinkle” to avoid awkwardness with the word’s euphemistic usage. Heeding Mrs. Livingston’s wise advice, they changed the title, reworked some of the lyrics, and delivered “Silver Bells” to the studio. The number was simply staged by director Sidney Lanfield, with the cast standing in a choir-like formation and singing it straight through.

Filming on The Lemon Drop Kid wrapped up in August of 1950. In October of that year, ahead of the film’s premier, Decca released “Silver Bells” as a single with vocals by Bing Crosby and Carol Richards, backed by an orchestra conducted by John Scott Trotter. By December, it had become a smash hit, causing Bob Hope and fellow producers to worry that the bland scene in the forthcoming film would be a disappointment to audiences. Hope arranged for his friend, comedy writer Frank Tashlin, to come up with a more elaborate staging of the number, and the cast and crew returned to the lot to re-shoot.³ The result is a scene that, though peppered with some regrettable racist humor, made “Silver Bells” an instant holiday classic.

It is easy to see why “Silver Bells” is so appealing. The tune is catchy and easy to sing, with lyrics full of sentimental descriptions of Christmastime in an urban setting. The genius of Livingston and Evans’ composition is that the verse and chorus, when sung together, create a nice counterpoint. They also created a counter-melody to give the chorus some variety when it is repeated. Thus, “Silver Bells” can be arranged many different ways. In addition to the Bing Crosby recording, some other notable tracks have been offered by Doris Day (single, Decca, 1950), Johnny Mathias (Merry Christmas, Jon Mat Records, 1958), and the recently deceased Jim Nabors (Christmas, Columbia, 1972). For something a little different, enjoy this heavy metal cover by Twisted Sister (from Twisted Christmas, Razor & Tie Recordings, 2006). No matter how hard you like to ring them, “Silver Bells” chimes in as a favorite entry for many in the great American Christmas songbook.

²Evans refers to the bell on the desk in his 2005 NPR interview, while Livingston referred to the Salvation Army’s Santas in a 1988 interview with American Songwriter Magazine (July-August 1988).