In 1934, radio star Eddie Cantor needed a new Christmas song to sing on a live broadcast during the Macy’s Thanksgiving Day Parade. He approached Leo Feist, a music publisher, who happened to have a song he had not yet published by composer John Frederick “Fred” Coots and lyricist James Lamont “Haven” Gillespie titled “Santa Claus is Comin’ to Town.” At first, Cantor was unsure if “childish” appeal of the song would make it a hit, but his wife encouraged him to give it a chance. He was glad she did! Within 24 hours of the broadcast, 100,000 copies of sheet music had been purchased, and another 300,000 had sold by Christmas.¹ A studio recording by banjoist Harry Reese and his Orchestra (with vocals by Tom Stacks; Decca) had also sold over 300,000 copies overnight. Needless to say, it has remained an annual hit ever since. In 1970, Rankin/Bass Productions, Inc. created a stop motion animated special based on the song for ABC, featuring Fred Astaire as the narrator S.D. Kluger and Mickey Rooney as Kris Kringle.

While I could shower you with a list of celebrated recordings, I’d instead like to treat you to a guest blog by my colleague and dear friend, Rachel Evangeline Barham. She shares one of the most unusual interpretations of this jovial holiday hit and a glimpse of the man behind it:

Stumbling Upon the Musical Genius of Joseph Spence

As a professional singer, I have a pretty low tolerance for the “holiday” music that wallpapers America nonstop for the last month of every year (or, to my dismay, more than the last month). I’ve done my share of starting Christmas music rehearsals before Columbus Day, so musical holiday cheer is not a strong motivator for me. Maybe that’s why my first encounter with Bahamian guitar genius Joseph Spence was such an epiphany.

My spouse and I were sitting on the couch listening to a local radio show called Traditions with Mary Cliff: “folk music and things you can see from there.” Suddenly, the sounds coming from the radio were unlike anything we’d ever heard. I stared at him wide-eyed, and he scrambled for the volume knob. We listened in pure delight to Joseph Spence’s genre-defying interpretation of “Santa Claus is Comin’ to Town.”

We set out to find out everything we could about him. It turned out that we were pretty late to the party. Joseph Spence lived from 1910 to 1984, and among those who cite his influence are Taj Mahal, Ry Cooder, and the Grateful Dead. His songs were first recorded and brought to a wider audience in 1959 with the release of the Smithsonian Folkways album Music of the Bahamas Volume One: Bahamian Folk Guitar (below). This album features field recordings taken by Samuel Charters, whose personal interest in the varieties of music made by North Americans of African descent were seminal in bringing to light the influence of the blues on jazz.² His enthusiasm for such music led him to amass field recordings of now legendary folk musicians whose contributions may otherwise have been lost forever, including those done on Joseph Spence’s front porch. 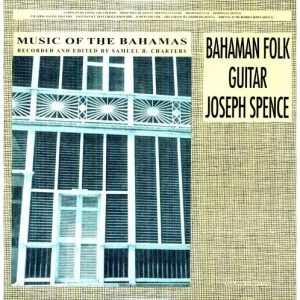 One of the things that makes Joseph Spence’s recordings so delightful is his vocalizations. The actual lyrics of the songs occasionally make appearances, but they are overshadowed by the instantly recognizable scat style that employs his unique idiolect, influenced by the rhythmic lilt of Bahamian creole.³ As easy as it is to get lost in the pure joy of Spence’s vocal style, his guitar technique and facility with improvisation are truly remarkable. The first time Samuel Charters heard Spence, he thought there were two guitarists playing together,⁴ and many accomplished guitarists have found Spence’s plucking technique easy to admire but difficult to imitate. Spence’s fancy finger work on his sometimes out-of-tune guitar, the percussive effects of his vocal sounds, and his rhythmic beating on the body of the instrument make a complete one-man band. Now that’s holiday cheer.

“Out on the Rolling Sea“

“Jump in the Line“

¹Eddie Cantor is well known to DC-area listeners as the singer of “I Love to Spend Each Sunday With You (One Hour With You),” the sign-off song for WAMU’s long-running old time radio show “The Big Broadcast.”