Posts with the tag: Baby It’s Cold Outside

As I’ve been chatting about this blog series with friends, more than one person has asked me: “You aren’t going to do ‘Baby, It’s Cold Outside,’ are you??”

Therefore, let me make this disclaimer on the outset: I am not going to discuss this song in the context of 2017. It was not written in 2017, and if it were, it would be a failure. Frank Loesser wrote it in 1944 to sing with his wife for friends attending a party. Did date rape not exist then? Of course it did. Unfortunately, sometimes lyrics just don’t hold up, and that’s exactly what has happened here. Our tolerance for such humor has changed, but the song remains. I cannot speak on Loesser’s behalf, but if he were around today to defend his work, I believe he would explain that the song represents a game of mutual flirtation–neither want the night to end, but one is worried about her reputation (again, it’s 1944, and respectable women don’t “stay over”). While we could start dissecting the verse to prove whether or not that is the case, I’m not going to do that. It’s already been done, again and again.

I have long admired the music of Frank Loesser. The handful of musicals that he wrote are diverse, both musically and thematically. I best got to know him (and his music) while directing a community theater production of How to Succeed In Business Without Really Trying, a 1961 show about a scheming window washer who climbs the corporate ladder by fraud and fiddle. My favorite number, which I kept no secret from my cast and crew, was “It’s Been a Long Day.” In the scene,¹ the protagonist, J. Pierpont Finch, meets his new co-workers, secretaries Smitty and Rosemary Pilkington, at the elevator at close of business. The three attempt small talk, but the nervous attraction between Finch and Rosemary get in the way. With the discrete persuasion of Smitty, the two make plans for dinner at Stouffer’s – “service for two [for] $3.58.” The call and response format along with the clumsy flirtation are reminiscent of a song Loesser had written seventeen years earlier.

In the winter of 1944, Loesser hosted a housewarming party with his wife, former nightclub singer Lynn Garland, in their Navarro Hotel home in New York City. To indicate to their guests that the party was coming to an end, the Loessers sang a duet he composed just for the occasion, “Baby, It’s Cold Outside.” In the song, which Loesser indicates in the original score is sung by “Mouse” and “Wolf,”² Lynn’s attempts to bid farewell to her husband are met with resistance. While she expresses concern about what her family will think, he encourages her to avoid the bitter temperatures and cozy up with him. The guests loved it, asking the couple for an encore. Following their party, they received requests from other hosts to perform the number at their own gatherings. The song was a hit, but only among showbiz elites.

In 1948, MGM bought the rights to the song. The studio wanted to include it in their upcoming film, Neptune’s Daughter. In the movie, the number is performed twice through:  the first time features romantic leads Esther Williams (singing the Mouse role) and Ricardo Montalbán (singing the Wolf role); the second time around, the gender roles are reversed, with supporting cast mates Betty Garrett as the Wolf and Red Skelton as the Mouse. One may wonder if the decision to have the comedic relief repeat the exchange with the tables turned was an effort to diminish any uneasiness the first scene may have caused. Honestly, I doubt it, but the laughs it gets are certainly appreciated. The scene earned Loesser an Academy Award for Best Original Song in 1950. 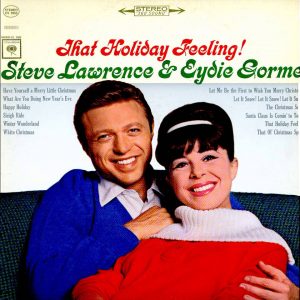 Before Neptune’s Daughter premiered, Dinah Shore and Buddy Clark had already recorded “Baby, It’s Cold Outside” for Columbia records. By the end of year, other versions were offered by Ella Fitzgerald and Louis Jordan (Decca), Margaret Whiting and Johnny Mercer (Capitol), and Laura Leslie and Don Cornell (with Sammy Kaye and his Orchestra; RCA Victor). Mercury released a simple piano/vocal recording of Loesser and Garland singing their own song, just as they did at the parties they hosted and attended. Even the country music world had fun with the tune when RCA Victor released a slightly altered rendition, “with apologies to Frank Loesser,” by Homer and Jethro with the legendary June Carter. As I’ve pointed out with a few other tunes I’ve covered so far in this series, the song has nothing to do with Christmas, and was not written with the holiday in mind at all. Jo Stafford and Dean Martin both included “Baby, It’s Cold Outside” on their “wintertime” albums, Ski Trails (Columbia, 1956) and A Winter Romance (Capitol, 1959), respectively. The first explicitly Christmas album to feature the duet was Steve Lawrence and Eydie Gorme’s That Holiday Feeling (Columbia, 1964). Ever since then, it’s been a treasured (though recently controversial) part of the American Christmas songbook.

¹This clip is taken from the 1967 film adaption of the musical by United Artists, which starred Robert Morse (the original Finch), Michele Lee, and Kay Renolds.