Posts with the tag: Kay Jackson 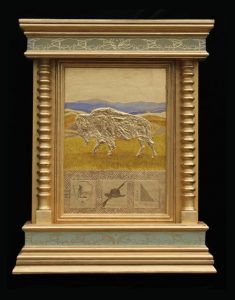 The University Libraries is proud to be showcasing the work of local artist, Kay Jackson, in an exhibit titled “On the Verge of Extinction: Gilding Techniques & Vanishing Species.” Jackson’s unique style employs ancient gilding practices to draw attention to at-risk and endangered wildlife. Describing her work, Jackson writes:

For the past twenty-five years, the environment and endangered species have been the major focus in my work. Using gilding techniques originating in ancient Egypt and perfected by European artists during the 14th and 15th centuries, I have attempted to bring attention to fragile ecosystems and vanishing animal populations with a medium that is also in danger of being lost. Medieval and Renaissance artists used these same materials and techniques to create some of the world’s most beautiful and enduring religious artwork. The light reflected from a gilded surface represents a spirituality that awakens reverence in the viewer and, even in today’s world, mesmerizes us with its symbolic optical power. I hope the golden aura illuminating from this work helps shine a light on endangered species and allows the viewer to reflect on our interdependence with nature and all God’s creatures.

Kay Jackson received a MFA in painting from George Washington University in 1984 after studying at Virginia Tech and the Corcoran School of Art. Her work has been shown in private galleries across the United States and exhibited at the National Academy of Sciences, the National Sporting Museum in Middleburg, Virginia, The College of William and Mary, American University and George Washington University. Her work is in the permanent collection of the Corcoran Gallery of Art, the National Academy of Sciences, the Muscarelle Museum at The College of William and Mary, The Federal Reserve, the U.S. Department of State and the Smithsonian Museum of American Art. To learn more about Jackson and her other works, visit www.KayJacksonArt.com.

The exhibit is on display in the May Gallery on the first floor of the John K. Mullen of Denver Memorial Library now through March. A gilding demonstration with the artist will be held Wednesday, February 15, from 4:00 to 5:00 PM in the May Gallery of Mullen Library. The event is free and open to the public. To request accommodation, please contact Joan Stahl at stahlj@cua.edu or 202-319-6473 at least one week before the event.