Posts with the tag: Santa Baby

In “It’s Beginning to Look Like Christmas,” Meredith Wilson lists a variety of Christmas presents suitable for good little girls and boys:

But what does one get for the more mature good girls on the gift list? To answer that question, Victor Publishing approached lyricist Joan Javits in the summer of 1953. They wanted her to write a Christmas song for Eartha Kitt, a lounge singer, dancer, and actress deemed “the most exciting woman in the world” by Orson Welles. The song was to play up on Kitt’s femme fatale image. Javits shared the request with her new songwriting partner, composer Philip Springer. The first element to be established was the title, “Santa Baby.” From there, Springer started to develop a melody. He recalls asking Javits to come up with the first line of the song, and she quickly gave him “…slip a sable under the tree.” The wheels began to turn, but Springer needed two more words to finish his musical idea. So, she added: “…for me.” With that sentiment established, the rest of the tune fell into place. In about three weeks, the song was completed.¹ 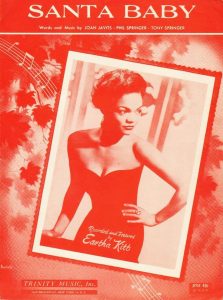 The next hurdle was getting it published. Javits and Springer were both members of ASCAP (American Society of Composers, Authors and Publishers), but needed it published by rival BMI (Broadcast Music, Inc.) to be recorded. To get around the conflict of interest, they credited Philip’s brother Tony as a songwriter (in reality, he had no hand in the creation of the song). The music was then ready to be handed off to Kitt to record. With the Henri René orchestra backing her, the songstress laid down the track in New York City in July, and the single was released by RCA Victor in October. It was a major hit, with over 545,000 copies selling by the end of the year.²

The following year, RCA Victor had Kitt return to the studio to record a sequel, “This Year’s Santa Baby.” Using the same melody and nearly the same orchestral arrangements as the original, Javits provided new lyrics in which the gold-digger complains about how the previous years’ gifts are in disrepair, asking for even more opulent presents. While the verses are witty, the recording was a commercial flop. In 1963, she re-recorded the original song with a slightly quicker tempo for Kapp Records. For the next twenty-five years, it didn’t get much attention–except for an extra special rendition by Mae West on her album Wild Christmas (Dagonet, 1966).

Then in 1987, the song saw a resurgence in popularity when it was covered by Madonna to be included on the charity album A Very Special Christmas (A&M).³ The Material Girl’s version was based on the 1963 recording by Kitt, though Madonna’s vocals are more reminiscent of Vivian Blaine’s Adelaide from Guys and Dolls than Eartha Kitt’s signature sound. Since then, it’s been recorded dozens of times. Of course, Kitt is a hard act to follow. It is interesting to note that the legendary chanteuse passed away on Christmas Day in 2008. However, the song she made famous lives on in the American Christmas songbook.