Posts with the tag: Tolerance

If you’re a songwriter, and you want to give a one-of-a-kind Christmas gift, what do you give? A brand new Christmas carol, of course! And between 1942 and 1954, that’s exactly what composer Alfred Burt did. Carrying on a tradition started in 1922 by his father, the Rev’d Bates Gilbert Burt, Alfred composed a new Christmas carol to be included in the Burt family Christmas card. These festive songs remained undiscovered outside of the friends and family who received the annual card. All that changed in 1952 when Burt asked the Blue Reys, the vocal ensemble of Alvino Rey’s orchestra (which Burt, a jazz trumpeter, had joined in 1949), to sing through that year’s carol, “Come, Dear Children.” The group was so impressed that they performed it and a few other of Burt’s carols at the King Sisters’ Christmas party that year. With exposure to the Hollywood music scene, word of Burt’s carols began to spread. James Conkling, president of Columbia Records, arranged to have the carols recorded by a professional choir at the North Hollywood Church of Jesus Christ of Latter-Day Saints. Burt, whose health was rapidly deteriorating due to lung cancer, composed four new carols to fill the 10″ LP, one of which, “The Star Carol,” was included in the 1954 Burt family Christmas card. The resulting album, The Christmas Mood (Columbia) was released in time for the 1954 holiday season. Unfortunately, Burt passed on February 7 of that year and was not able to see the project to completion.¹

While Alfred Burt’s carols may not top most people’s lists of holiday favorites, a few have been covered several times over the years. One is the tender and chant-like “Some Children See Him,” written in an unusual 5/4 meter with an almost modal, folk-like melody. With verses crafted by Burt family friend and church organist Wihla Hutson, the heartwarming song reminds us that children from all races “[w]ill see the baby Jesus’ face / Like theirs, but bright with heavenly grace, / And filled with holy light.” Powerful words, especially considering the song was composed in 1951–less than a decade after the end of World War II, at the height of the Korean War, and at dawn of the African-American Civil Rights Movement. Xenophobia and racial tensions in America were strong, and Hutson’s verse stressed that we should learn from the innocence of children that love and tolerance is more powerful than hate and fear. 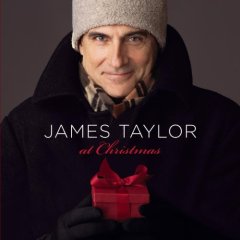 Following the release of The Christmas Mood, “Some Children See Him” was covered by Andy Williams on his album Merry Christmas (1965, Columbia). Three years later, Perry Como recorded it for The Perry Como Christmas Album (1968, RCA Victor), but it was ultimately cut from the album and not released until 1999, when RCA compiled a collections of Como’s greatest holiday hits. More recently, James Taylor included an intimate and heartwarming rendition on his first Christmas album in 2004 (Hallmark limited edition), which Columbia then re-released with a slightly altered track listing two years later (pictured right). Ten years later, Kenny Rogers recorded the track as a duet with Alison Krauss for his album Once Again It’s Christmas, modifying the tune to fit a more conventional triple meter.

Though Alfred passed away in 1954, the Burt family tradition lives on! In 2001, Alfred Burt’s great niece, Abbie Burt Benitis, renewed her uncle’s legacy of sending Christmas greetings complete with new carols. Now a professor of composition at Concordia University in Saint Paul, MN, Benitis has set music to texts written by her Uncle Alfred, her Great-Grandfather Bates, and Wihla Hutson. Her mother, Emily Burt, has helped each year in the creation and mailing of the cards. Last December, Benitis sat down with John Birge of Classical Minnesota Public Radio to talk about the Burt family tradition and share her new carol for Christmas 2016, “Sing Him to Sleep.” How remarkable that this talented family continues to add new music to the American Christmas songbook!

¹More information about the Burt family tradition of annual carol writing can be found at AlfredBurtCarols.com.