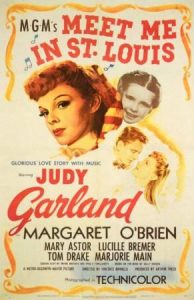 If you’ve never seen Meet Me in St. Louis (MGM, 1944), stop everything you are doing and go watch it right now. It’s a classic Hollywood musical that features Judy Garland in her prime. Adapted from a series of vignettes written by Sally Benson for The New Yorker in 1941-42 (which she later published as a novel), it tells the story of the Smith family of St. Louis, Missouri, in the year leading up to the opening of the 1904 World’s Fair. The Tinseltown songwriting team of Hugh Martin and Ralph Blane wrote three original numbers for the film, including “The Boy Next Door,” “The Trolley Song,” and the most famous “Have Yourself a Merry Little Christmas.”

In the scene that sets up “Have Yourself…,” Garland’s character, Esther, arrives home from the Christmas Ball, where her beau, John (played by Tom Drake), has just proposed marriage. She finds her little sister, Tootie (played by Margaret O’Brien), who is worried about the family’s upcoming move to New York. She fears Santa Claus won’t be able to find their new address in the Big Apple. Esther sings to comfort Tootie as she fights back her own tears. Their world is going to significantly change, and both girls are frightened at the uncertainty that lies ahead.

The lyrics are touching, but they are not the original ones that were offered by Martin and Blane. The first set had been rejected by Garland and the director, Vincente Minnelli (Garland’s future husband), for being too pessimistic.

A chilling sentiment, right? It’s even more devastating when you consider that Meet Me in St. Louis was released during World War II. Had the original lyrics been kept, the number would have sent moviegoers into hysterics. Garland was worried she’d be perceived as a monster for singing something so dark to the young O’Brien. At first, Hugh Martin was resistant to make any changes. Tom Drake convinced him that the lugubrious lines would be disastrous for him, Garland, and the film.¹ Thankfully, he obliged, and revised the text to what we know today. Also, by removing the plot-specific reference to New York, he ensured the song would have a life outside the film (nor would it offend proud New Yorkers!). Decca released a recording of Garland singing the song with Georgie Stoll’s orchestra accompanying her that peaked at #27 on the Billboard charts. 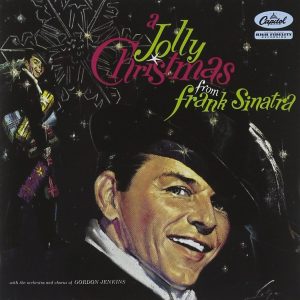 In 1957, Frank Sinatra asked Martin to revise the lyrics again for a version he wanted to include on his album A Jolly Christmas from Frank Sinatra (Capitol; right). The line he found too gloomy was “Until then we’ll have to muddle through somehow.” Martin’s response was “Hang a shining star upon the highest bough.” Covers of the song that have been released since then have used both lyrics. Personally, I prefer the original as it keeps with the melancholy but optimistic theme. As long as I’m sharing my personal preferences, one of my favorite versions of the song is actually from an instrumental medley on The Carpenters’ Christmas Portrait (A&M, 1978), in which “Jingle Bells” is so cleverly quoted above the chords that transition the end of the first couplet back to the dominant (remember what I said about quoting “Jingle Bells”? Always a good idea!). Another treasure is Betty Bennett’s recording from her album Nobody Else But Me (Atlantic, 1955), in which she sings the rarely recorded verse:

When the steeple bells sound their “A”
They don’t play it in tune.
But the welkin will ring one day,
And that day will be soon.²

If the story of the original lyrics is new to you, be warned that you may never hear the song quite the same way again. It’s always been a sad song, and I think that is what makes it so beautiful. Christmas brings a lot of emotions–not just joyous ones. Songs that capture that wide array of feelings we experience during the holidays are what make the American Christmas songbook so very special.

²This verse appears in a 1944 edition of the sheet music, though it did not appear in the film. As far as I can tell, Bennett is the first to include it in a commercial recording. That same melody appears in later recordings with different lyrics as an introduction: “Christmas future is far away / Christmas past is past / Christmas present is here today / Bringing joy that will last.” Welkin–in case that word is unfamiliar to you–is a synonym of firmament or heavens (So is the apocalypse being suggested here?? Yeesh!)

2 thoughts on “The American Christmas Songbook: “Have Yourself a Merry Little Christmas” (1943)”