For the past three weeks, I have had a wonderful time researching the origins and histories of America’s most beloved Christmas songs. I’ve learned a great deal, and I hope you have, too! When I decided to take on this project, I knew from the beginning that I was certainly not going to be able to cover all the songs that I thought deserved a post. I also decided I didn’t want to try to rank them in any particular order. However, I was sure that my last post was going to go to a song most deserving to be the grand finale: Irving Berlin’s “White Christmas.”

We know Berlin composed “White Christmas” in early 1940, but we don’t know where, or whether he had a specific purpose in mind. The two most popular speculations are that he wrote it while staying at either the La Quinta Resort near Palm Springs, California, or at the Arizona Biltmore Hotel in Phoenix, Arizona.¹ In either case, it is most likely that he was inspired by the heat of the American Southwest to write a song about a snowy Yuletide–just as Bob Wells and Mel Torme were to compose “The Christmas Song” and Jule Styne and Sammy Cahn were to write “Let It Snow! Let It Snow! Let It Snow!” This is suggested by the introductory verse, which, unlike many such prologues from that era, was not added later, but was part of the original lyric: 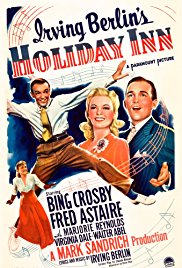 The sun is shining, the grass is green,
The orange and palm trees sway.
There’s never been such a day
in Beverly Hills, L.A.
But it’s December the twenty-fourth,—
And I am longing to be up North.

Berlin may have also already had Holiday Inn in mind. He pitched the idea of a musical film about a hotel that only opened for major public holidays to Mark Sandrich, the director with whom he had produced three musicals for RKO starring Fred Astaire and Ginger Rogers. Sandrich, now at Paramount, got the studio on board, and Berlin signed a contract in May. Astaire was cast alongside Bing Crosby, with Marjorie Reynolds and Virginia Dale as the love interests. Filming took place between November 1941 and January 1942. (Interesting note: As a result of the attack on Pearl Harbor, the Fourth of July sequence was greatly expanded to honor the military. America’s entry into the war and rapid deployment of troops may have also motivated Berlin to shelve the introductory verse, as it diminished the emotional impact that the song had on homesick soldiers and their families.²) 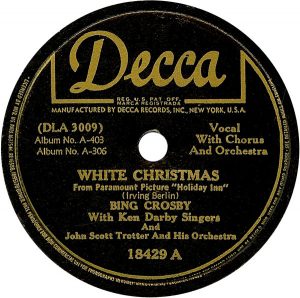 On Christmas Day, the first performance of “White Christmas” was heard by millions of listeners tuning into Bing Crosby’s NBC Radio show The Kraft Music Hall. In 2011, the badly worn recording of that broadcast was shared with CBS to be featured in a Sunday Morning segment marking the 70th anniversary of the song’s debut. Crosby formally recorded it for Decca with the John Scott Trotter Orchestra and the Ken Darby Singers on May 29, 1942. It was released July 30, five days before Holiday Inn premiered in New York. Both the film and the single of “White Christmas” were commercial successes–the film was the highest-grossing musical motion picture to date and ranked in the top ten films of the year, while the song topped the Billboard charts for eleven weeks starting in October of 1942 and won the Oscar for Best Original Song in 1943. It was so popular that by 1947, the master recording at Decca had become too worn to use. Crosby was brought back to the studio to re-record it. (The original arrangements were used, with the exception of added flutes and celesta at the beginning. The 1947 recording is now safely preserved by the Library of Congress.)

In 1949, wheels began turning at Paramount to produce another film to capitalize on the success of Holiday Inn, and more specifically, its most popular musical number, “White Christmas.” Originally, Crosby and Astaire were going to be reunited in the lead roles. However, Astaire backed out of the project after he was disappointed with the script. To replace him, Donald O’Connor was brought on board, but he, too, had to back out due to health issues. Finally, Danny Kaye was cast to play Crosby’s sidekick, and Rosemary Clooney and Vera-Ellen completed the quartet. Berlin wrote new songs and Michael Curtiz was chosen to direct. Paramount released White Christmas on October 14, 1954. It became the highest grossing film of the year, bringing in $12 million.

The legacy of “White Christmas” is astounding. Both Holiday Inn and White Christmas were adapted into Broadway musicals. The first recording remained the top-selling single until it was finally surpassed in 1997 by Elton John’s remake of “Candle in the Wind” for the late Princess Diana. Earlier this month, Billboard reported that “White Christmas” is the second most covered Christmas song of all time with 128,276 known versions in existence (the first place spot goes to Franz Gruber and Joseph Mohr’s 1818 carol, “Silent Night”).³ It was included in the “NPR 100” for being one of the most important American musical works of the 20th century. Crosby’s 1942 single holds the #2 spot following Judy Garland’s “Over the Rainbow” on the Recording Industry Association of America’s “Songs of the Century,” and in 2002, it was one of the first fifty to be added to the Library of Congress’s National Recording Registry.

Throughout this series, I have willed myself to not describe any of the songs with a certain term that makes me cringe due to its overuse. However, in this case, I think it most appropriate. “White Christmas” is truly iconic, and that is why I find it to be the perfect selection to conclude the “American Christmas Songbook.” From all of us here at the University Libraries of The Catholic University of America…

“May your days be merry and bright,

and may all your Christmases be white!”