While Catholics have been an integral part of American history for hundreds of years, President-elect Joseph R. Biden will be only the second U.S. President who is Catholic. At University Libraries, you can find a wealth of research and records on the intersection of Catholicism and the United States Presidency.

The first major presidential candidate of Catholic faith was Al Smith. Smith was a New York City politician of working-class origin. After working to enact social reforms into law, he served four terms as Governor. In 1928, he earned the nomination of the Democratic Party for candidate for president. Anti-Catholic sentiment was pervasive at the time, however, and this prejudice greatly affected Smith’s fortunes. The Ku Klux Klan, newly resurgent in the 1920s in part because of anti-Catholic and anti-immigrant sentiment, burned crosses to protest the Democrat’s election campaign. Smith lost to Herbert Hoover, who was inaugurated in 1929.

For more information on Al Smith and anti-Catholicism, visit the American Catholic History Research Center and University Archives, which preserves and maintains original records relating to these events. Their Anti-Catholic Literature Collection features anti-Catholic pamphlets circulated at the time of the 1928 U.S. presidential campaign. Blog posts in our Archivist’s Nook series, including one on the eve of Pope Francis’ campus visit, include digitized versions of these pamphlets. In addition, the department maintains other collections of anti-Catholic literature.

The first American Catholic to be elected U.S. President was John F. Kennedy. Kennedy was the son of a businessman (who served as first SEC chair and Ambassador to Great Britain), a hero of World War II, and a U.S. Representative, then Senator, from Massachusetts. In 1956, the University’s Alumni Association awarded Kennedy the Cardinal Gibbons Medal at November’s homecoming dance. The Alumni Association had given the award annually to a person who “rendered distinguished service to country, Church, or the Catholic University.” Digitized copies of student newspaper The Tower, maintained by University Libraries, detail Kennedy’s acceptance speech.

Like Smith, Kennedy faced anti-Catholic prejudice in his 1960 run for the presidency. For example, a Protestant organization led by Norman Vincent Peale, the “National Conference of Citizens for Religious Freedom,” politicized Kennedy’s religious faith by accusing him of being captive to the Roman Catholic Church’s views. The young senator dedicated an entire election speech to his political independence and swore that if “[the] office [of the presidency] would require me to either violate my conscience, or violate the national interest, then I would resign.” While Kennedy achieved a narrow win against Richard M. Nixon (who was raised as a Quaker), he faced a double-standard: the win required him, and not his rival, to frequently address his religious faith.

Since Kennedy’s untimely death in 1963, only two Catholics have been nominated by a major political party for the U.S. Presidency: Senator John Kerry of Massachusetts, and President-elect Biden. (Pat Buchanan ran under the obscure Reform Party ticket in 2000.) Kerry lost to George W. Bush in 2004, and later served as U.S. Secretary of State under President Barack Obama.

Kennedy’s visit in 1956 is one chapter in a series of presidential visits to Brookland. President-elect Biden visited campus at least three times in the 1970s, usually as a guest of student government to speak on the topic of being a Catholic in politics. Keep reading our What’s Up blog for future blog posts on Biden’s connections to The Catholic University of America.

In addition to the archival collections, blog posts, and online documents linked above, check out the online resources linked below to learn more about JFK and religion in U.S. politics.

The author would like to thank Special Collections Archivist Shane MacDonald for assistance in research for this blog post. 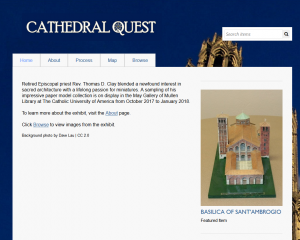 University Libraries is excited to share a new companion website for its current May Gallery exhibit, “Cathedral Quest: Great Churches in Miniature.” Here, you can read more about the exhibit’s background, view high-resolution images of exhibit items, and explore an interactive map.

This website will be the first in a series of companion websites for our exhibits in the May Gallery and elsewhere in our John K. Mullen of Denver Library building. Over the years, the May Gallery has hosted a series of fascinating exhibits, such as “Fine Lines: Discovering Rembrandt and Other Old Masters at Catholic University” and “Sworn to be Free: Irish Nationalism, 1860–1921.” Now these stories can continue to live online after the exhibit has formally closed.

If you haven’t seen our Cathedral Quest exhibit yet, come visit us! If you aren’t able to make the trip, visit our companion website and learn all about it online.